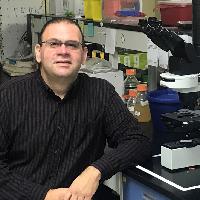 Dr. Carlos Rios-Velazquez undergraduate and graduate experience have allowed performing research studies with a diverse group of microbes including fungi, bacteria, and viruses; combined with the molecular and physiological understanding of their biological processes in order to test its potential for solving problems. The Microbial Biotechnology and Bioprospecting (MBB) laboratory developed by Dr. Rios-Velazquez in 2001 at UPR-Mayaguez seek the detection of activities with biomedical and biotechnological application from microorganisms in different environments using functional genomics, and combinatorial chemistry technology. Also, the Rios-Velazquez’ MBB lab. has focused on using microbiological, biochemical, physiological and molecular approaches to isolate, and identify cultivable microbes such as purple-non sulfur phototrophic bacteria, cyanobacteria and bioluminescent bacteria among others. The MBB lab.  has trained more than 500 students from the Biology, Microbiology and Biotechnology, and twelve Graduate students have obtained their MS. Some of the undergraduate students have been able to participate with Dr. Rios-Velazquez in programs such as Faculty and Students Team (FaST: NSF, DOE at Lawrence Berkeley National Laboratory), and Computational and Systems Biology initiative (CSBi: Howard Hughes at Massachusetts Institute of Technology) and Mastering Metagenomics at University of Wisconsin-Madison and Yale University.  He was part of the NSF funded Microbial Observatory at Cabo Rojo Salterns, where Microbial Mats were molecularly analyzed in order to understand bacterial diversity, and generating metagenomic libraries in order to find new genes and activities present in uncultivable microbes. Recent studies have been also performed in rainy and dry forests in Puerto Rico supported by USDA-CSREES. The expertise in metagenomics developed in the Dr. Rios-Velazquez MBB has allowed the developed of libraries from multiple environments such as water reservoirs, rives, caves, hot-spring, compost and new research is being done in snail and sea cucumber microbiomes. Also the MBB has been involved in the development of several workshops metagenomics for investigators, teachers and faculty in different educational institutions in Puerto Rico.  This includes collaborations with colleagues in different disciplines. Besides having a teaching license from the Department of Education of Puerto Rico, and being a supervisor of the teachers’ preparation program, Dr. Rios-Velazquez is actively involved in educational research and pedagogically activities and experiences for students teachers and faculty at different levels in topics such as emerging disciplines such as metagenomics, Geomicrobiology, Synthetic Biology, development models to involve secondary schools in research and Responsible Conduct of Research.